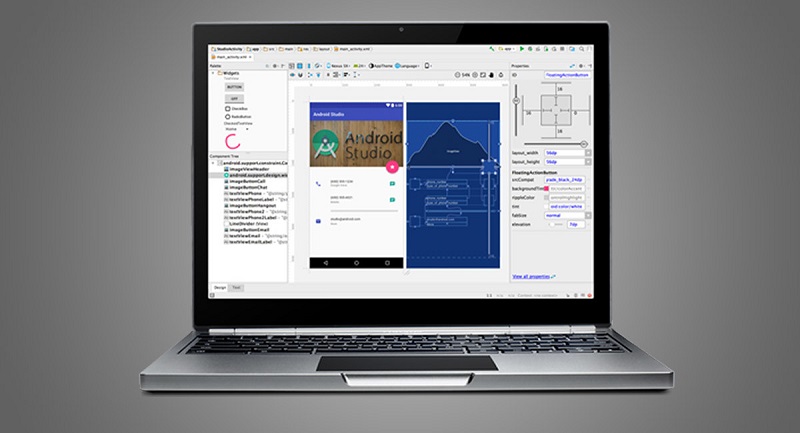 The changes are based on three fronts: speed, intelligence and better support for the Android platform, which are materialized among other improvements in the new UI designer Analyzer APK, improved Instant Run or support for virtual sensors the emulator.

Android Studio already had before with an interface designer, but it was neither the most practical nor fastest to use in the world. The new Layout Editor includes an editor of drawings (blueprints) and a properties panel to modify each element of the interface quickly.

This new designer comes from the hand of the new ConstraintLayout that comes to improve the existing RelativeLayout what to design refers responsive interfaces. Luckily, this new design is backward compatible with API level 9 Android 2.3, so being on the cutting edge design does not imply that the application to stop working in older Androids.

Mobiles are increasingly powerful but also applications are becoming heavier. And sometimes for no reason, because with minimal optimization can be achieved miracles in what the final size of the APK is concerned. That’s where the analyzer enters APK, available on the menu Build – Analyze APK.

The idea is that you can see the size of the different elements included in the APK (DEX classes, resources …) both raw and download size, so you can make the necessary adjustments to speed up the megabytes.

You may also like to read another article on FreshLookApp: Web, alternative customers or official applications, how we use our favorite social networks?

Some applications need to make use of certain sensors in the device and are therefore difficult if not impossible to test in an emulator. Now things change, because the emulator included in Android Studio 2.2 includes almost t ll sensors you can imagine as the accelerometer, ambient temperature or magnetic.

The changes do not end here, but there are many other new features under the hood, or in the form of Beta functions. In the latter is the new experimental cache, the recorder usability tests , and debugger GPU .

As for the internal changes include improved support for C ++, the search of code examples and improvements Instant Run. As usual, your own Android Studio will warn you of the update and can also be downloaded from the website, occupying just over giga and a half.