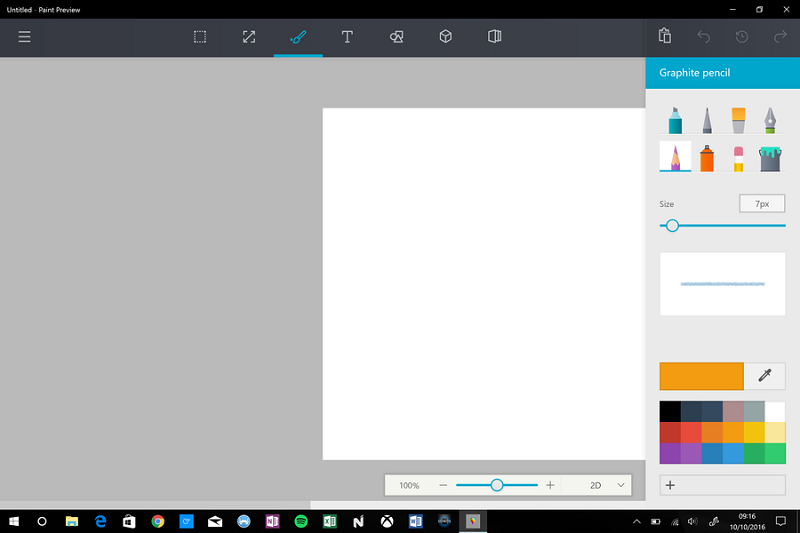 Microsoft Paint has accompanied the Windows operating systems since 1985, and have since been very few changes that have been made in its interface. That is why we were surprised to discover they had decided to modernize its interface to adapt to the times of touch in a new version that has begun testing in the Preview program builds beta testers Insider.

At the moment it is only an alpha version, which means that until it is released the final can still change many things yet. But curiosity has been able to, and taking advantage of a few hours ago seeped into the network the executable to install it on any Windows 10, we decided to try and bring you a first contact.

The first thing we will appear an error message in which we are informed that Windows SmartScreen prevented the onset of an unknown application.

And that’s it, once we do this we have the preview of Paint installed. You have to keep in mind that it is removed from the preview builds of Windows Insider program version, so if we are not using these test versions of Windows 10 not the application will be updated, and therefore the errors are not solved and bugs with which we are. In any case, it is enough to snoop a little work in Microsoft.

Another thing you have to keep in mind is that when the application is run, the name will be displayed Paint Sprint 1604-2. Here you do not panic, do not you have downloaded any false version of the program, and that closing this window will see presentation called Paint Preview, and soon you will see all the hallmarks of the application.

A different and committed tactile interface

If something takes decades, differentiating Paint the rest of editing applications and imaging it is its simplicity without sacrificing versatility. This distinctive feature is the great responsible for taking even basic possibilities continues to have a loyal user base that uses it to perform basic and quick edits.

Microsoft seems aware of this fact, and therefore has been limited to changing it completely modernize all up and down interface but keeping intact virtually all functions of the original Paint. Moreover, the changes introduced appear to be directed to further enhance its role as one of the most complete basic applications.

The main differences in the interface we see in the picture above, which we see at the top of the Preview the new Paint and lower the current that comes in Windows 10. So far the interface was especially aimed at computers keyboard and mouse, showing all options on one screen with small icons on click. The new interface instead has several sections and icons to press them with the touch controls.

New Paint functions are divided into seven tabs. The first is the selection, allowing us to select the entire drawing or just a certain area to copy, cut, paste or delete the selection. Also it can be rotated 90 degrees or invest in horizontally or vertically. The second option is a Calvas with which resize the drawing.

Thirdly, we have the classic option of drawing, you can choose between different types of pencils and formats by selecting the color you want to draw or the size of our lines. There are a number of predefined colors to choose from, but also have the option to get a color palette to define one to our liking.

This menu also have options and erase fill color.  Along with this feature we fourthly the text, which will allow us to enter text with the font and color you want, and even choose formatting such as italic, bold and underlined.

Fifthly we have the option to create geometric shapes. We’ll have a few art, but also we can go creating them point by point so that they are to our liking. These figures are in two dimensions, and just to the right we will have the sixth option to create three – dimensional figures.

You may also like to read another article on FreshLookApp: Photos Microsoft is updated with a revamped interface and new filters

This function is the biggest news of the new Paint, but at least in the Preview version is noticeably incomplete. We can only create six types of three – dimensional figures, and the only option besides rotate them is to give them a predetermined color. It is made less power change slightly or so as to create from scratch with 2D, although at least the figures interact with each other. If we create a circle and then a cone, the cone will fit into the circle.

In any case, the possible absences we should not worry considering that is a preview version, the first alpha at which Microsoft Insider have access. In the presentation of the new Paint itself had some more features, so it is logical that as development progresses will implement more three -dimensional options.

Finally, we have the seventh option, the community to share our creations to the moment that little game we will get. Finally, Paint Preview also has a menu of options on the left side with which to create a new project, open, save, print or share.

It is interesting that there are also options to import 3D models in .cool format, and although disabled also have to export. This gives us clues that suggest that Microsoft is taking very seriously the three-dimensional features of the application, and certainly in this direction will the next inclusions that we see.

One final note is that in addition to the options of undo and redo, the new Paint Preview introduces a third option timeline. It will see a bar in which we can easily move back through all the changes we have made during our project, which is much better than going backwards again and again.

Conclusions on the new Paint

Paint has always been a basic and essential application, a tool to turn to for basic issues without having us to eat the head with more advanced programs. But time was leaving some out of date functions, and I think Microsoft was right to redesign keeping his personality.

The icons are much larger, which, together with the touch features, makes an application Paint again becomes essential in the world of hybrid devices. Interesting is also the decision to get into 3D modeling. It is an advanced option for Paint, so it will have to see how the Microsoft manages to keep it as easy to use as the rest.

During testing, I have not encountered any bug signification, and the application has proved completely stable. Missing some options, yes, but these will coming as the alpha version will become beta, and surely the time I get to open all of Windows 10 catalog and have something much more complete. In short, Microsoft is doing well in the context limited what has always been this application.