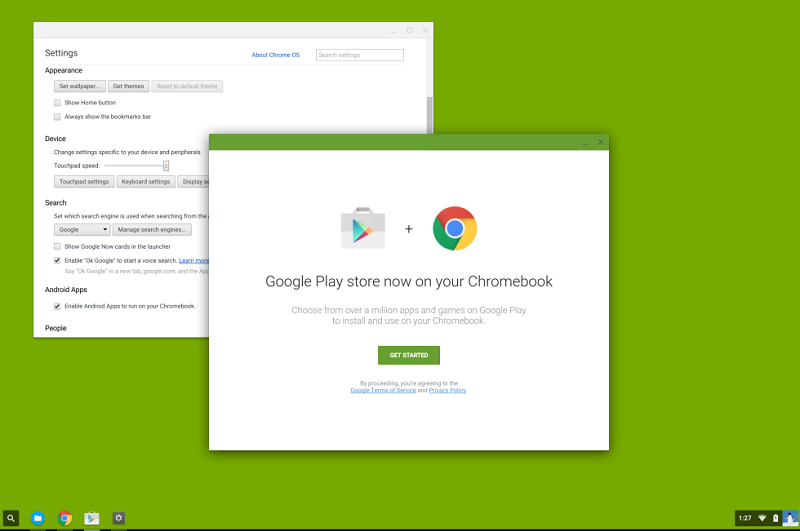 Although its market success is very different, we lifetime anticipating a convergence of the two systems Google: Chrome OS on the desktop and Android, especially on mobile devices. With the news that we share we can say that the lines that separate them become more diffuse.

The search engine company already was working on how to bring Android apps to Chrome OS – Vine, Evernote or Duolingo, seeking to give new life to the operating system with fewer titles; I wanted to do through a project called ARC (App Runtime for Chrome). Unfortunately this initiative was closed to certain developers.

Now it sounds like the millions of applications available on Android will arrive through the Play Store. We do not talk about tools to transform applications titles that can be hung on the Chrome Web Store, talk about direct access to the Android store.

We have to go to Reddit to meet the first tests of this work reveals to that in the configurations of version 51 of Chrome OS has appeared something like a “enable applications to run on your laptop” in a menu on “Android applications”. This version of the system was only available in the developer channel.

You may also like to read another article on FreshLookApp: Eleven useful things you can ask Google Now

Catches enclosed you can see the dialog box that invites you to open the door to Google Play Store from a Chromebook. And you can do to the idea of content that can be easily reached: games, books, movies, songs, tools, etc. Okay, many are already accessible via web services, but we think it may make sense to a native version.

Breaking barriers between Chrome OS and Android? It seems that we are closer

Obviously Google has not confirmed any of this, and maybe what we are seeing is nothing more than a test, a test for something that may not see the light soon. We continue to believe that the universal applications and content have much common sense, as Chrome OS you can sit very well any help.